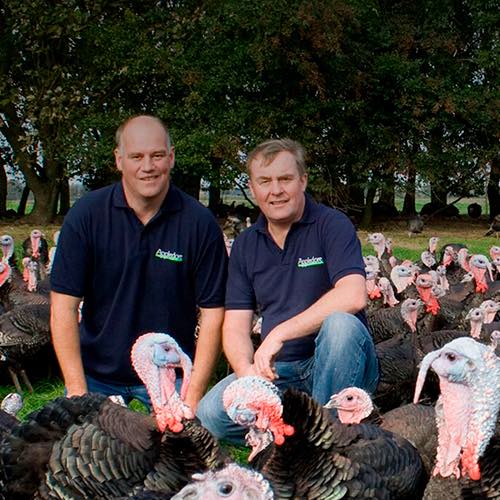 When Grandfather Frank Wreathall was rearing a few turkeys on his farm in Suffolk in 1940, little could he have imagined the achievements of his two grandsons, Andrew and Clive, on their Crown Estate farms bordering the south Kentish coast. The two brothers farm over 900 hectares of the Romney Marsh, producing apart from their succulent Christmas turkeys – top quality wheat, dried peas and oil seed rape.

What began as a small enterprise at Priory Farm has grown to become the success that is Appledore Turkeys – where Christmas turkeys of the highest quality and taste are produced in the traditional way.

Appledore Turkeys are given the greatest attention by all the Wreathall family, including the brothers’ young children, who from a very early age have learnt the benefits of traditional animal husbandry. As the Festive Season approaches the entire family are actively involved – making sure that only the very best is available for their fellow Kentishmen and those further afield.

Since 2013 Appledore Turkeys have received Great Taste awards every year. Widely acknowledged as the most respected food accreditation scheme for artisan and speciality food producers, Great Taste awards are a signpost to a wonderful tasting product.

We use cookies to ensure that we give you the best experience on our website. If you continue to use this site we will assume that you are happy with it.OkPrivacy policy