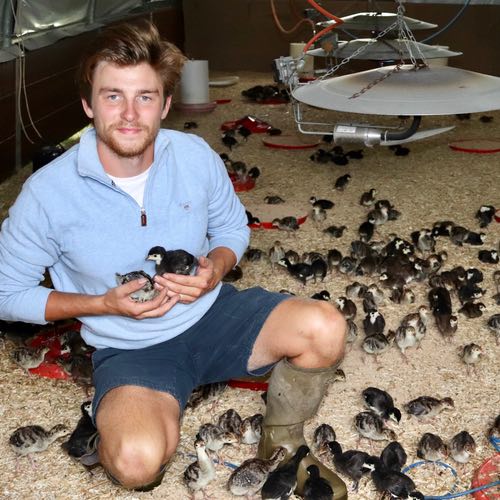 The Frederick family has been farming since the early 1800’s and has been at Temple Farm, Royden, Essex since 1937. Over the years their farming business has evolved, from a traditional mixed farm to one that specialises in the seasonal production of free-range, slow-grown, Christmas turkeys.

Charlie (pictured) and Nick Frederick are the working partners at Temple Farm. Charlie is the fourth generation of the family producing the same bird that was sold locally, half a century ago. Over the past thirty years, their “succulent and tasty” white and bronze feathered free-range Christmas turkeys have built a fine reputation nationally.

As members of the Traditional Farmfresh Turkey Association (TFTA), they produce only top quality “Golden Turkeys”. Their flock is raised in the old fashioned way, to strict growing standards. To enhance the flavour of the meat the birds are dry-plucked by hand and game-hung for at least seven days.

Charlie Fredericks recommends you cooking simple and follow the instructions that come with the bird. Put the bird in a roasting tray breast down. Add a mug of cold water, an onion cut in half and a sprig of rosemary. After half of the cooking time turn the bird over onto its back and finish. Check the temperature of the bird three-quarters of the way through the recommended time. Once it is at the right temperature take the bird out of the oven and leave it to rest for up to an hour before serving.

Complete the form below to contact Temple Farm Turkeys