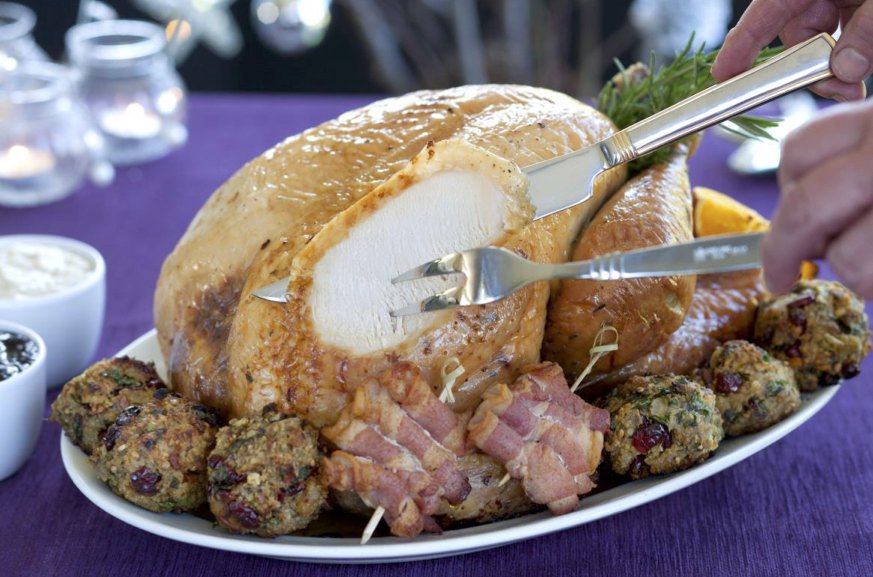 To finish the gravy:

Place the turkey in a large roasting pan, brush the turkey generously with rapeseed oil and season with sea salt and black pepper and cover with foil.

Place the prepared turkey in the pre-heated oven and cook at this temperature for the first 30 minutes. Then, lower the oven temperature to 180°C/Gas Mark 4 and cook for approximately 30 minutes per kilo, basting every hour.

Heat the butter and rapeseed oil until the butter has melted. Add the onion and mixed spice, fry gently until well softened but not browned. Stir in the garlic and breadcrumbs and season well with sea salt and

black pepper. Remove from the heat and place in a bowl, leave to cool.

Peel the apples, cut into quarters, remove the core and cut into small cubes. Mix the cubed apples, cranberries, dried apple, sage, sausage meat, parsley and orange zest with the onion mixture, season well with sea salt and black pepper using clean hands and then mix in the beaten egg. The mixture should be quite firm, with wet hands, mould the stuffing into balls the size of a golf ball or make a stuffing cake.

Place the stuffing balls on a greased baking sheet and bake in the pre-heated oven for about 20 minutes, until golden brown and cooked through.

When the turkey is approximately 35 minutes before the end of cooking, remove the foil, drain off any of the excess fat and cook for a further 35 minutes or until golden brown.

Transfer the turkey to a platter and cover loosely with foil and leave to rest for 20-30 minutes.

Wash the giblets in cold water, place in a large pan with 1.5 litres of cold water. Bring to the boil and removed any scum of the top of the water with a slatted spoon. Then add the rest of the ingredients, cover and simmer for 40 minutes.

Uncover the pan and simmer for a further 20-30 minutes or until the stock has reduced by half. Remove from the heat and strain into a bowl, leave to cool, cover and place in the fridge or use immediately.

To make the gravy, bring the stock back to the boil and remove from the heat.

When the turkey is cooked pour off the fat from the roasting juices, place the tin on the hob, whisk in the flour and place over a low heat and cook the flour mixture making sure you have scrapped up all the meaty sticky bits, on the bottom of the tin and stir constantly. After 2 minutes, remove from the heat and whisk in the turkey giblet stock, bring slowly to the boil, stirring constantly.

Add the Madeira and cook for a further 3 minutes, stirring constantly. Season to taste add a little more Madeira if you want and then strain into a warm jug and serve. Any leftover turkey Madeira gravy can be frozen.

The giblet stock can be made 2 days before required.

● Where applicable, remove the giblets and keep separately in a cool place.

● Remove the turkey from the fridge 2 hours before cooking, to allow it to reach room temperature.

● Do not stuff the main cavity, as this will stop the turkey cooking properly. Instead, You might like to place an apple or peeled onion in the cavity.

● We recommend that you do not use foil as this can prevent you achieving a lovely crispy skin.

● Place the bird breast side down in the roast tin and season with salt and pepper. For crowns keep the breast up. The oven should be preheated to 180ºc (160º fan) Gas 4/5. For an Aga, use closest to these temperatures. (See table for suggested cooking times). Place the giblets around the bird.

● Gravy always tastes better if the turkey giblets are used to make it.

● It is very important not to overcook a turkey – many people do and are then disappointed when it is dry. Test with a fork on the inside of the thigh – when the juices run clear the bird is ready.

● After removing the turkey from the oven and before carving it, allow it to rest for 30-60 minutes. Do not cover.

Per Serving of the Gravy